For convenience, we can define a Liouville operator,

so that the Liouville equation becomes

For systems without self-interactions, the solution of Liouville equation is straight forward. \(\Gamma\) space can actually be reduced to \(\mu\) space which is spanned by the freedoms of only one particle. Here we need to address the fact that we are dealing with identical particles.

We reduce the complicity of the interactions while keeping the salient features. Dimension reduction is key to this idea. First of all, we will introduce some reduced densities.

We define a normalized density

We can write down the Hamiltonian of the system for any two-body spherically symmetric interaction,

Write down the explicit Liouville equation for this problem and integrate over \(\{ \vec X_{s+1}, \cdots, \vec X_N \}\). Using approximation of large N limit, we derive a hierarchical set of equations,

The smaller \(s\) is, the lower the order of differentials is, thus the easier the solution seems to be. Unfortunately, to find out \(s=1\), we need \(s=2\) and the hierarchy goes haywire. Sooner or later, we have to cut the hierarchy manually.

As mentioned previously, the ideal situation is to solve Liouville equation directly and exactly. However, it’s generally impossible. The knowledge in between marcoscopic and microscopic, aka, mesoscropic, can help. 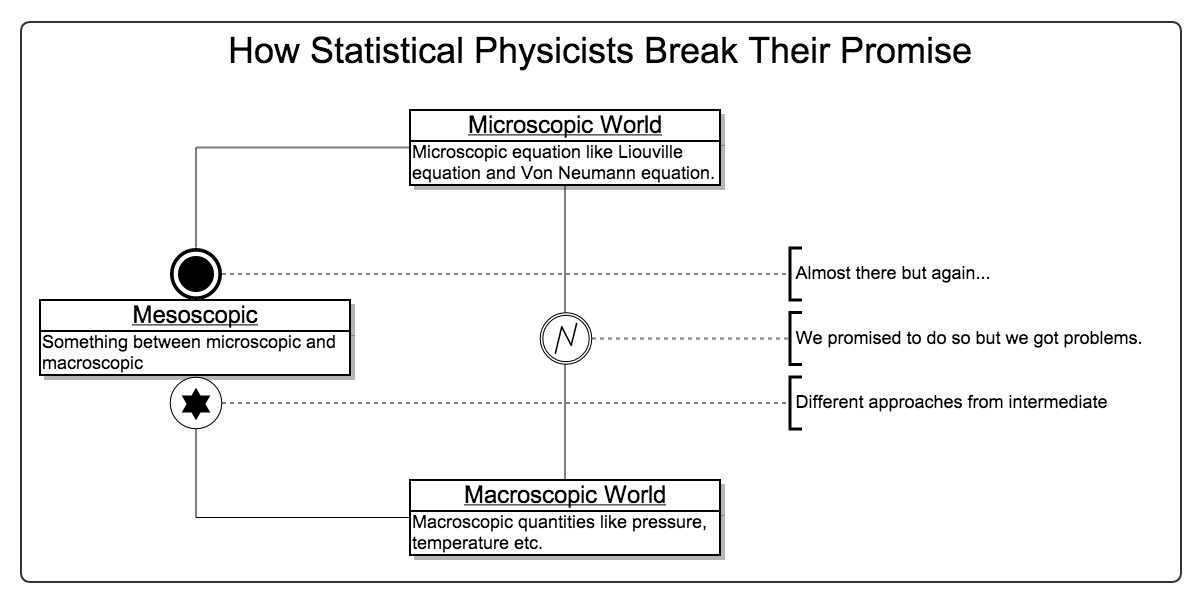 We investigate a box of gas. First of all, we divide the box of gas into two parts. Two states, i.e., the LEFT state and the RIGHT state, are discussed instead of states in the whole phase space. 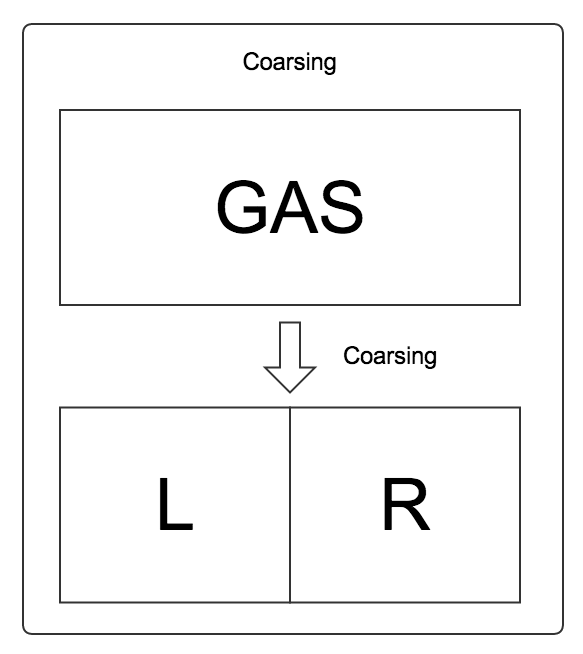 We can write down two equations using our intuition,

This is a coarse grained view. More generally, we have

The important thing is that these equations are linear.

Boltzmann then proved that this \(H\) functional can not decrease for isolated and weakly interacting systems.

This result shows the statistical mechanics view of the second law of thermodynamics, which indicates that adiabatic process can never decrease the entropy of a system.

The idea is to find an equation for one particle probability density \(f_j(\vec r, \vec v_j,t)\) by considering the number of particles move into this state and out of state due to collisions between the particles. Since we can find all contributions to \(f_j\) by applying scattering theory of classical particles, this equation can be written down explicitly. It will be an integrodifferential equation.

Consider the distribution in a short time \(dt\). We write down the change of particle numbers due to collision and we find the Boltzmann equation.

where \(\vec X\) is the external force on the particle, the prime \({}'\) denotes the quantity after collision, and \(b\) is the impact parameter.

In the derivation, the most important part is to identify the number of particles into and out of this state due to collisions.

H theorem says that the functional \(H\) can not decrease. This particular derivation requires a classical, particle number conserved system.

There were two objections on H theorem:

To Loschmidt’s questioning, Boltzmann pointed out that H theorem is a statistical theorem rather than mechanics theorem. Quantities in this theorem like \(f\) are statistical averages, not the quantity of a specific particle.

Zermelo’s objection is not a serious problem because the recursion time is extremely long.