Harmonic Oscillator and Density of States¶

As derived in quantum mechanics, quantum harmonic oscillators have the following energy levels,

Thus the partition function is easily calculated since it is a simple geometric progression,

The limiting behavior of the partition function is

The internal energy is derived using the partition function,

By definition, the specific heat is the change of internal energy as temperature changes, i.e.,

This specific heat behaves is shown in Fig. 11. 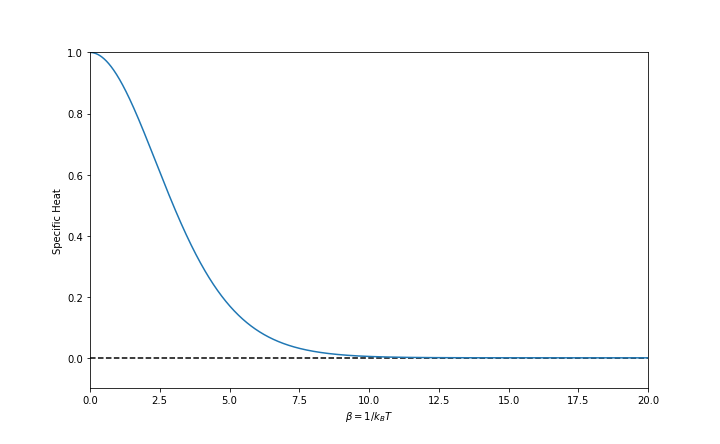 Though we have infinite energy levels, the specific heat won’t blow up because the probability of a high energy level state is extremely small.

In thermodynamics, the free energy of a system is given by

In statistical mechanics, the free energy can be derived from the partition function,

In fact, all thermodynamics quantities are solved, as long as we find out partition function. For example, the entropy is

Generally speaking, the partition function can be expressed using the following integral,

Calculation of the Density of States¶

Here we consider the free quantum particle in a 2D box as an example.

In the momentum (wave number \(\mathbf k\)) space, all possible states are distributed on a virtual grid as shown in Fig. 12. 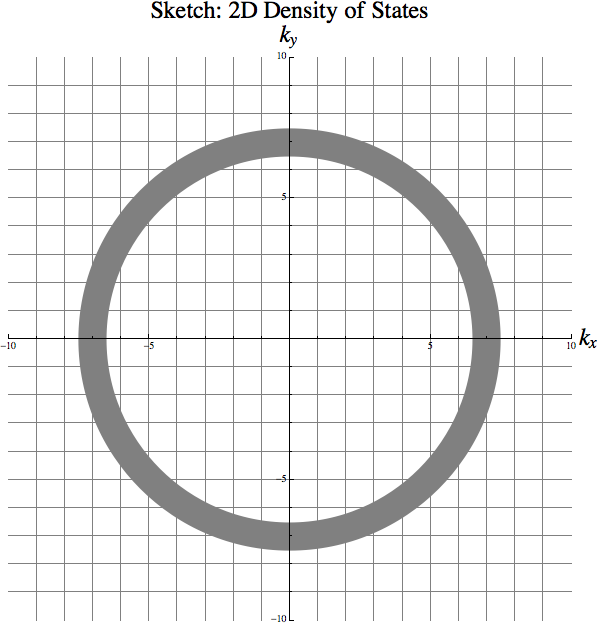 We can rewrite the expressions,

where \(d\) is the dimension of the system or box.

Dispersion relations and Density of States

To sum up, the quantities that are used to determine the DoS:

Density of States for Some Simple Systems¶

Dimension is Crucial for Density of States

These results are very different. For 1D system, the higher energy of the system is, the smaller the DoS is. As a comparison, the DoS for 2D systems doesn’t depend on the energy. In 3D, the DoS is proportional to the square root of energy.

The DoS is very important in understanding quantum systems. Quantization can lead to strange DoS. On ther other hand, the DoS is always constant in classical systems without quantizations.

Partition Function and Density of States¶

The thermal wavelength decides the characteristic correlation length in thermal systems. It is the estimated average de Broglie wavelength of the particles under this temperature, i.e., the average size per quantum state. Thermal wavelength is

For a single particle in a 3D box, the partition function is

Recall that the partition function is the average of density of states under the Boltzman distribution and that the thermal length is the characteristic length of the thermal system. We rewrite this formula using words to make the implications clear.

For a N-particles system without interaction between particles, density of states will be more dense since we have more possible states and degrees of freedom. In classical mechanics, the number of states will be full combination of all the single particle states since all the particles are distinguishable. Thus the partition function should be \(Z_N = (Z_1)^N\). The free energy

This quantity is neither intensive nor extensive! If we combine two exactly same system, then we won’t have twice of the free energy. It’s called Gibbs mixing paradox.

The solution to this paradox is to apply the symmetries in quantum mechanics and consider the indistinguisabilities.

More about the Gibbs mixing paradox is discussed in Gibbs Mixing Paradox.

We provide a physical picture of the quantum partition function using classical mechanics in this section.

In classical mechanics, the partition for a free particle function is

We assume that the energy levels are very close to each other and so that \(E_i\) becomes almost continuous. Then we rewrite the partition into a integral,

We are using natural units.

Equantion (11) seems to be problematic since it has a different dimension from (10). It is not a problem because we are using natural units. We need to supplement some quantity which has a dimension \([p\cdot x ]^3\). It has to be \(h^3\). So the integral form of the partition function becomes

In fact, \(h^3\) is the characteristic phase space block in quantum mechanics.